¶ 1 Leave a comment on paragraph 1 0 For adults, adopting a hobby such as stamp collecting was often seen as an exercise in self-improvement. The self-improvement movement arose in the antebellum era but extended into the late nineteenth and early twentieth century with efforts to bring culture to those who might not have access to it through university life. Lyceum’s, women’s clubs, and Chautauquas organized lecturers around the country to discuss art, literature, and history. Visiting a museum exposed visitors to great works of art while belonging to the Book-of-the-Month Club in the mid-1920s offered participants a chance to read great literature at home. ((Joseph F. Kett, The Pursuit of Knowledge Under Difficulties: From Self-Improvement to Adult (Palo Alto, CA: Stanford University Press, 1994).; and Janice A Radway, A Feeling for Books the Book-of-the-Month Club, Literary Taste, and Middle-Class Desire (Chapel Hill, N.C: University of North Carolina Press, 1997). One member of the book selection board, Dorothy Canfield Fisher, suggested in her 1907 book, What Shall We Do Now, that children could spend their free time collecting and trading stamps or by creating paper snakes using old stamps. Dorothy Canfield Fisher, What Shall We Do Now?: Five Hundred Games and Pastimes (New York,: F.A. Stokes company, 1907), 278, available, http://www.gutenberg.org/files/31186/31186-h/31186-h.htm ))

¶ 2 Leave a comment on paragraph 2 0 During the Great Depression, some unemployed adults learned to collect stamps in free classes offered by emergency relief programs. During a time when most Americans had less money to spend on non-essential items, stamp collecting continued to grow as a hobby prompting one observer to note that philatelic advertisement pages thrived in stamp papers. To his surprise, people continued to spend money on things they could not eat. ((Wilds Dubose, “Stamp as a Hobby,” Los Angeles Times, November 20, 1932, sec. F, 7.)) To help manage the numbers of unemployed, some municipalities and civic groups offered adult education classes in the arts and in hobbies in the spirit of self-improvement. In New York City, the Emergency Relief Bureau organized and sponsored free classes for residents and in turn employed artists, musicians, and other unemployed people to teach a variety of classes at city recreation centers, parks, and playgrounds beginning in 1932. While classes were open to all residents they were “designed especially for the unemployed,” and over 19,000 adult students enrolled within the first six months. Classes in hobbies such as stamp collecting, photography, and home mechanics were available in these free institutes held across the city. Due to the city’s success, other municipalities in the state emulated those public education programs. ((Eunice Fuller Barnard, “New York Sets Out to Capture Culture,” New York Times, September 23, 1934, sec. SM, 6.; and “Jobless Teaching Jobless Who Seek Added Learning,” Christian Science Monitor, June 17, 1933, 1.)) Local authorities tapped into the network of established hobbyists to instruct fellow citizens who had unexpected free time on their hands. Stamp collecting was branded as a worthy way to spend time.

¶ 3 Leave a comment on paragraph 3 0 Stephen Gelber proposed that having an avocation in the form of an enjoyable hobby during the Depression was particularly important because a hobby maintained a work ethic for those who did not go to work each day. Often contradictory to the term leisure, many hobbies practiced during non-work hours actually emulated work, which some scholars called “serious leisure.” Because of the ethic involved in serious leisure activities, some recreation advocates suggested that hobbies actually made people better workers. (( Steven M. Gelber, Hobbies: Leisure and the Culture of Work in America (New York: Columbia University Press, 1999); R.A. Stebbins, Amateurs, Professionals, and Serious Leisure (Montreal: McGill-Queens University Press, 1992); A.D. Olmstead, “Hobbies and Serious Leisure,” World Leisure and Recreation 35, no. 1 (1993): 27–32.))

¶ 4 Leave a comment on paragraph 4 0 Adult education programs formally taught philately and other pursuits to keep unemployed workers primed and ready for their next job. If this was true for adults, then teaching philately to children might be preparing them to enter the work world as an adult. During this time teachers enrolled in philately classes at the University of Minnesota, Temple University, and Harvard’s School of Education and Social Service, and college students organized philatelic clubs. Universities hired APS members as their instructors, further extending the reach and influence of philatelic clubs on the diffusion of philatelic knowledge to adults. ((Kett, The Pursuit of Knowledge Under Difficulties ; Radway, A Feeling for Books the Book-of-the-Month Club, Literary Taste, and Middle-Class Desire ; and E.F. Sellmansberger, “Philately’s Place in American Education,” American Philatelist 50, no. 12 (September 1937): 674–5.)) 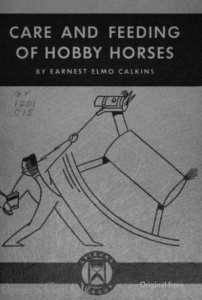 ¶ 6 Leave a comment on paragraph 6 0 During the Depression, stamp collecting was also promoted by the conservative Leisure League of America (LLA). The organization published literature, sponsored hobby shows, and embarked on a public relations blitz to encourage citizens to adopt a hobby. After its founding in 1934, president and founder James S. Stanley went on a campaign to promote 700 different recreational activities published in The Care and Feeding of Hobby Horses for the purpose of saving “the nation from boredom.” Stanley complained that too many Americans were willing to sit and watch others play rather than doing it for themselves. Philately and other select hobbies earned a monograph. Some newspaper editors found this hobby movement a bit comical and joked that the LLA was “wasting time busily.” ((“Americans Spend 4 Billion on Play,” New York Times, July 29, 1934, sec. N, 2.; Earnest Elmo Calkins and Hugh Brotherton, Care and Feeding of Hobby Horses (New York: Leisure league of America, 1934), available, http://babel.hathitrust.org/cgi/pt?id=mdp.39015007025383;view=1up;seq=5; Henry Renouf, Stamp Collecting (New York: Leisure League of America, 1934); R. H. L., “A Very Open-Faced Letter to the President of the Leisure League,” Chicago Daily Tribune, June 11, 1934, 14; “Designs for Loafing,” New York Times, June 3, 1934, sec. BR, 12; and “Wasting Time Busily,” Chicago Daily Tribune (reprint from Detroit News), May 2, 1934, 14.))

¶ 7 Leave a comment on paragraph 7 0 A rise in mass cultural offerings—movies, sporting events, amusement parks—troubled Stanley because he saw participants in those activities as being passive: watching rather than playing. Stanley acted politically conservative, worrying about communal bonds formed in public cultural venues. He declared during the first Hobby Round-Up on May 1, 1935, that “May Day is play day” and not a time for “radical demonstrations.” ((“Hobby King Wars on Boredom,” Los Angeles Times, June 11, 1934, 5.; and “Leisure Exhibit May 1,” New York Times, March 10, 1935, sec. N, 10.)) Stanley’s statement shifted the focus from offering leisure time activities merely to “cure boredom” to speaking out against radicalism in the name of hobbies. The Hobby Round-Up was Stanley’s way of taking back May Day from the Communists. He pushed hobbies as a way of mollifying increased union activity and New Deal policies that supported workers’ rights. Factory workers and union members did bond through mass culture participation in cities like Chicago in 1930s, which worked to unite previously divided workers in pursuit of common economic and production goals. ((Lizabeth Cohen, Making the New Deal, Industrial Workers in Chicago, 1919-1939 (Cambridge, UK: Cambridge University Press, 1990).)) Stanley praised hobbies as individualist pursuits.

¶ 8 Leave a comment on paragraph 8 0 Meant for general audiences, monographs published and distributed by LLA taught the basics of different hobbies, including stamp collecting. The stamp collecting book offered a guide for novices introducing them to collecting practices, philatelic clubs and papers, and a brief history of the postal system. Once again, stamp collecting was described as “purely educational” and had a “beneficial effect upon character.” According to the author, stamp collectors “must have an orderly mind” because they must be “neat, accurate, conscientious, observant, and honest.” He then admitted that it was difficult to ascertain whether these skills were developed or accentuated by stamp collecting, but that they were positive characteristics for all people, nonetheless. ((Renouf, Stamp Collecting.)) A publication such as this summarized many of the feelings developed about the worthiness of stamp collecting as a practice and why it should be taught to children and adults alike.