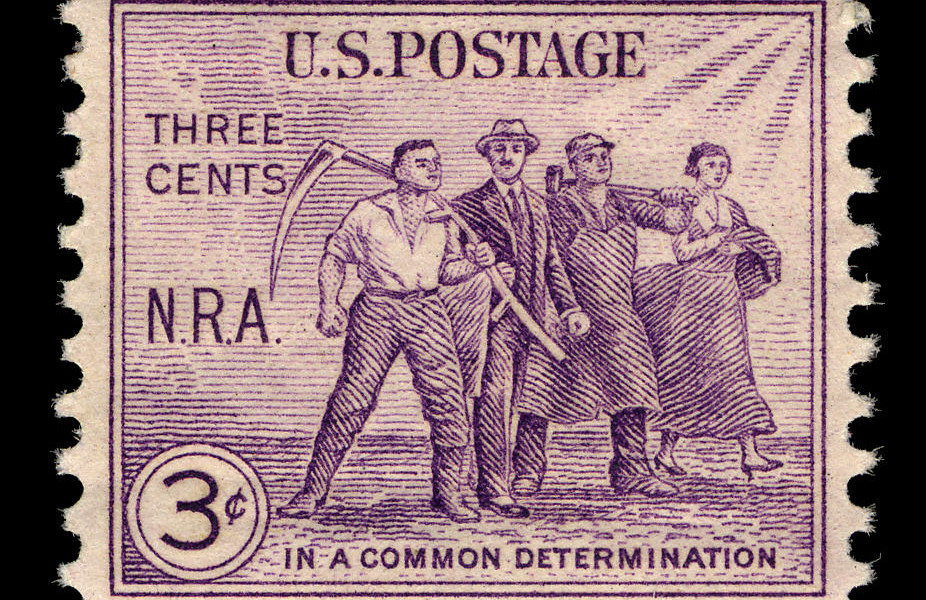 ¶ 1 Leave a comment on paragraph 1 0 The last chapter discussed how the Interwar years in the US brought tremendous interest in local and regional history, and commemoration of colonial and Revolution-related events. These activities continued into the 1930s with a big booster: the federal government. Letter writing campaigns to the USPOD continued into the 1930s, as civic and political groups saw there was power in circulating messages on stamps. Beginning in 1933, commemorative selections retreat from featuring regional and local anniversaries, and instead focus on celebrating state anniversaries, broad national themes, and supporting contemporary federal programs. Much of this shift comes after the election of President, and philatelist, Franklin Delano Roosevelt (FDR). He used the commemorative stamp program to build popular support for his federal initiatives. He understood that the visual language of stamps, printed by the USPOD, carried great power and could reach large numbers of Americans. Stamp collecting already appealed to many different people in first half of twentieth century, and as a philatelist, FDR saw collecting grow as a hobby from the nineteenth into the twentieth century. During FDR’s first term, the USPOD printed more special commemoratives than in previous administrations. ((Thomas J. Alexander, “Farley’s Follies,” Arago: People, Postage and the Post (Washington, D.C.: National Postal Museum), accessed June 21, 2009, http://www.arago.si.edu/index.asp?con=4&cmd=2&eid=8&slide=toc.))

¶ 2 Leave a comment on paragraph 2 0 During Franklin D. Roosevelt’s presidency, federal participation in and supervision of historical interpretation, practices, and preservation grew tremendously through a number of Depression-era programs. Prior to his election, federal public history work was very de-centralized. There was no national archive or federal history museum system, and the Smithsonian’s National Museum divided its exhibition space among collections representing many fields in the arts and sciences. Congress hesitated to take over locally-controlled sites when asked, while other sites maintained a strong legacy of female management through heritage societies who fought to keep interpretative control over sites they cared for. ((Patricia West, Domesticating History: The Political Origins of America’s House Museums (Washington, DC: Smithsonian Institution, 1999).)) Interest in promoting local and regional traditions continued as more Americans researched their family histories with help from genealogical bureaus that assisted researchers and encouraged individuals from non-elite families to discover their ancestral roots. These strong localized components complemented federal history initiatives during the New Deal. Folklife and the arts received attention as essential components of American culture, while the Federal Writers’ Project, various federal art projects, and the Historical American Building Survey employed hundreds of artists, historians, writers and elevated their work in communities across the country as nationally-significant. Through these programs, the federal government demonstrated a serious commitment to preserving history from the ground up and as a patron of the arts in ways not been in the past. ((Michael Kammen, Mystic Chords of Memory: The Transformation of Tradition in American Culture (New York: Knopf, 1991), 411–73.))

The expansion of the National Park Service (NPS) into historic preservation and interpretation is seen as a watershed moment for federal involvement in spreading historical knowledge and in constructing professional public history practices. In 1933, FDR officially consolidated all federally-managed battlefields and historic sites under the management of the NPS under the direction of Harold Albright. Prior to 1933, the Park Service focused on the conservation of natural resources and interpretation of geological history in their national parks, rather than on interpreting human history. Albright established a museum program that opened the door for historical interpretation to co-exist in national parks alongside beautiful scenery and physical science research. Professional historians, like Verne Chatelain, were hired to create interpretative strategies for sites, and to develop criteria for selecting new parks. Guiding the selection of new sites was the idea that all parks would be connected across a narrative arc representing “important phases” in American history. This approach privileged event-based sites over person-driven sites—battlefields over birthplaces. Some states, like Minnesota, had already developed a robust program for integrating a state-driven narrative across multiple sites for the NPS to borrow. Early Park Service historians shaped a national narrative about the American past by connecting sites across different states. With many locally-run sites petitioning for inclusion in the new park system, NPS developed practices for negotiating with local boosters about the conditions for acceptance. These practices would hold for decades to come and firmly established “history as a function of government service.” ((Denise D. Meringolo, Museums, Monuments, and National Parks: Toward a New Genealogy of Public History (Univ. of Massachusetts Press, 2012), 95–105; 153; John E Bodnar, Remaking America: Public Memory, Commemoration, and Patriotism in the Twentieth Century (Princeton, N.J: Princeton University Press, 1992), 177–81.))

¶ 4 Leave a comment on paragraph 4 0 The USPOD had been involved in history work since the late nineteenth century with its commemorative program, but that work never included historians. NPS officials were much more systematic in their approach to selecting sites for federal protection and interpretation. They developed criteria based on persistent themes they devised for major time periods to construct a progressive narrative of the American past. ((Meringolo, Museums, Monuments, and National Parks, 123–4.)) In contrast, the UPSOD never turned to or employed historians for guidance in making their commemorative selections. Instead, the office of the Third Assistant Postmaster General in consultation with the Postmaster General—political appointees—balanced the requests, and pressure, from citizens and their Congressional representatives when selecting figures and historical scenes for stamps that carried national significance. By the time the NPS sought suggestions for new historic parks, civic boosters and history enthusiasts already knew they could petition their government to ask that their favorite historic site, event anniversary, or hero represent the United States through publication on a postage stamp. NPS may have benefited from the USPOD’s established process.

¶ 5 Leave a comment on paragraph 5 0 During the 1930s, individuals and political groups demanded commemoratives that more fully represented the American past, including African American achievements and women’s suffrage, as the USPOD continued its role as an arbiter of cultural symbols. Stamp collecting surged in popularity during the Depression years, and more individuals saw, saved, and valued commemoratives as miniature memorials. When saved in an album, collectors reviewed and reflected on a stamp’s imagery and often researched the scenes and individuals represented. Subjects chosen to represent the US on a commemorative stamp lived on beyond the time period of their issue.

¶ 6 Leave a comment on paragraph 6 0 For the first time, a president who was an avid collector, directly influenced stamp selection and production.