¶ 1 Leave a comment on paragraph 1 0 Roosevelt used all of the mechanisms available to him to generate support for his New Deal relief programs, including the accessibility of commemorative stamps and the reach of the USPOD. The Department’s Third Assistant Postmaster General in charge of the stamp division Clinton B. Eilenberger, communicated regularly with philatelic societies discussing new US stamps and encouraging them to stay involved in collecting. At the Mississippi Philatelic Convention in 1934, Eilenberger stroked the egos of those attending proclaiming that “stamp collectors and those interested in this happy avocation are above the average in intelligence and cultural attainments.” That declaration was then printed in the Washington Post for all to read. Knowing that club philatelists disliked the commemorative series from the 1920s and early 1930s that celebrated regional events, he assured the crowd that under the new administration, the Department would only issue stamps that represent “the best in our history and tradition” of “National importance. ((“Stamp Collectors’ Mentality Praised: U.S. Official Calls Them High in Intelligence,” The Washington Post, October 21, 1934, A11.))

¶ 2 Leave a comment on paragraph 2 0 Speaking to the Society of American Philatelists that same year, Eilenberger demonstrated the shift to honoring subjects of “national importance” of the new regime. Designed and issued soon after the establishment of the National Recovery Administration (NRA) in 1933, the National Emergency Relief stamp worked to influence participation in and support of FDR’s earliest New Deal initiatives. FDR established the NRA with an executive order to promote industrial planning in establishing codes to regulate labor, prices, and production. To make the NRA stamp fit logically with the spirit of the existing commemorative stamp program, Eilenberger created a narrative of American progress that wove together the stories behind two other commemorative stamps issued by Hoover’s administration in 1933. 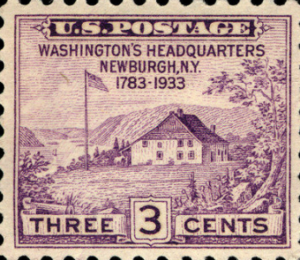 ¶ 4 Leave a comment on paragraph 4 0 Beginning with the “Proclamation of Peace” stamp that celebrated the cease fire ending the Revolutionary War, Eilenberger spoke how this memorial acted as a tribute to the “fortitude” and achievement of those who fought for independence “against almost unbelievable odds.” ((The Proclamation of Peace commemorative stamp was very much about celebrating the historic site in Newburgh, New York that served as George Washington’s headquarters in the last year of the Revolutionary War. Washington stayed at Jonathan and Tryntje Hasbrouck’s fieldstone farmhouse from April 1782-August 1783, and this structure became the first publicly-owned historic site in 1850. See more at: http://nysparks.com/historic-sites/17/history.aspx#sthash.vaOa5HN7.dpuf The British surrendered at Yorktown in October 1781, and soon after Washington relocated his army to New York state awaiting the final negotiations and agreement that became the Treaty of Paris. Declaring the “Cessation of Hostilities between the United States of America and the King of Great Britain,” two years after the surrender was symbolic, and Washington chose the anniversary of the first battle of the war– Battle of Lexington to be the day when the war officially ended, April 18, 1783. George Washington, “General Orders,” April 17, 1783, Letterbook 7, images 126-27, Library of Congress, Manuscripts Division, http://memory.loc.gov/cgi-bin/ampage?collId=mgw3&fileName=mgw3g/gwpage007.db&recNum=126.)) 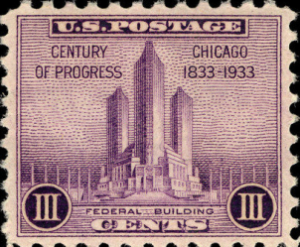 ¶ 6 Leave a comment on paragraph 6 0 Similarly, in the Century of Progress stamp that promoted the 1933 World’s Fair in Chicago, Eilenberger saw the “fulfillment of sacrifices and struggles of the early pioneers,” such as the sons of Washington’s soldiers from Newburgh who migrated west and south “in search of better home and greater opportunities for their children.” Their “success” was aided with developments of science and technology, but it really was due to “self-reliance” and the “American spirit.” ((Clinton B. Eilenberger, “Speech delivered to American Philatelic Society,” Proceeding of the 49th Annual Convention of the American Philatelic Society held August 27-31, 1934, Atlantic City 48, no. 1 (October 1934): 3-6.)) The NRA stamp, representing a voluntary collective effort to manage labor, wages, and pricing in a time of economic depression, was crafted as the logical next step in the progressive and triumphalist vision of American history that prized individualism and encouraged individuals to work together for a greater good. As support for the NRA’s voluntary codes and wage equality waned in 1934, Eilenberger gave a political speech to philatelists using the language of stamp imagery to seek support for the New Deal program. 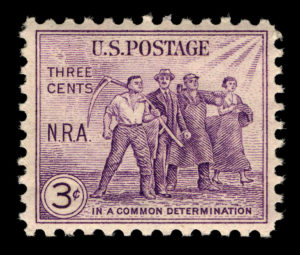 ¶ 8 Leave a comment on paragraph 8 0 Although starting strongly, the NRA struggled in 1934 to work with private industry, even when those businesses received exemptions from other federal regulations. According to Eilenberger, if everyone cooperated with the administration’s recovery efforts—big industry magnates and trade manufacturers, farmers and factory workers—then the stamp would represent the beginning of the end of economic hardship. According to Department, the stamp depicted “a farmer, a business man, an industrial worker, and a woman employee united in a common effort to banish unemployment and distress from the land.” If the same “courage and perseverance” read in the historical scenes represented on stamps was shown by the American people in the 1930s, then, Eilenberger declared, “the National Recovery Stamp will indeed be a memorial of victory.” ((United States Post Office Department, Annual Report of the Postmaster-General of the United States for the Fiscal Year Ending June 30, 1934

¶ 9 Leave a comment on paragraph 9 0 The stamp’s first design incorporated the NRA’s blue eagle, but people won out over the symbol. The faces united “in common determination” on this stamp were racially white, representing different ethnic backgrounds of American workers. The absence of an African American in the crowd accurately reflects that most black workers did not benefit from the NRA programs. Many lost their jobs because white employers refused to grant African Americans the same pay and benefits as their white workers, or employers ignored the industry codes to retain their discriminatory pay practices. (( Harvard Sitkoff, A New Deal for Blacks: The Emergence of Civil Rights as a National Issue (New York: Oxford University Press, 1978); Arnold T. Hill, “An Emergency Is On!,” Opportunity, Journal of Negro Life 11, no. 9 (September 1933): 280.)) On the other hand, a white woman stands as an independent person walking equally next to the industrial worker, farmer, and business man. Three of the four are looking ahead in the same direction with a “common determination.” This image also represents nameless citizens (everyman) who are not soldiers or fighting in the name of independence. Instead, they are going to work together with a shared purpose, on equal ground.

¶ 10 Leave a comment on paragraph 10 0 In the stamp’s image, the business man stands slightly apart from the others as he looks directly out of the stamp to its viewers. Collectors noticed this difference and wrote to both the Postmaster General and to President Roosevelt asking why the individual representing “Business or Capital is out of step” with the others when the stamp should represent the nation moving forward together. Department responses to collectors noted that the image came from an NRA poster indicating that in fact the business man is “a pivotal figure of the group, rather than being out of step.” ((Frank Wilson, “To Hon. James I. Farley,” September 20, 1933, Stamp Design Files, #732, National Postal Museum, http://arago.si.edu/index.asp?con=2&cmd=1&id=160708&img=6&pg=1; Third Assistant Postmaster General, “To Frank Wilson,” October 2, 1933, Stamp Design Files, #732, National Postal Museum, http://arago.si.edu/index.asp?con=2&cmd=1&id=160708&img=7&pg=1.)) An alternative stamp design actually drew FDR into the illustration among the workers. As a living person, he could not appear on a stamp, but we then can see that the business man in the printed stamp who is pivotal in the recovery efforts is Roosevelt. The rejected design also represents academia with a male graduate dressed in cap and gown, and a woman looks over the shoulders of the farmer and Roosevelt, relegated to the background of the image and not standing equally among the men. The final NRA stamp represented citizens as active in their own recovery. 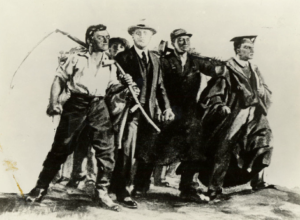 ¶ 12 Leave a comment on paragraph 12 0 By the mid-1930s, the Department connected directly with philatelists in ways that it had not in the many years prior, while it also dramatically expanded the commemorative stamp program to attract new collectors. The President and USPOD together worked to foster positive relationships between collectors and the Department to support the hobby, and to bolster optimism about the future of the US by showcasing specific initiatives, including Admiral Byrd’s trip to Antarctica.